2 Qualify for NHD national competition; another wins scholarship to Normandy 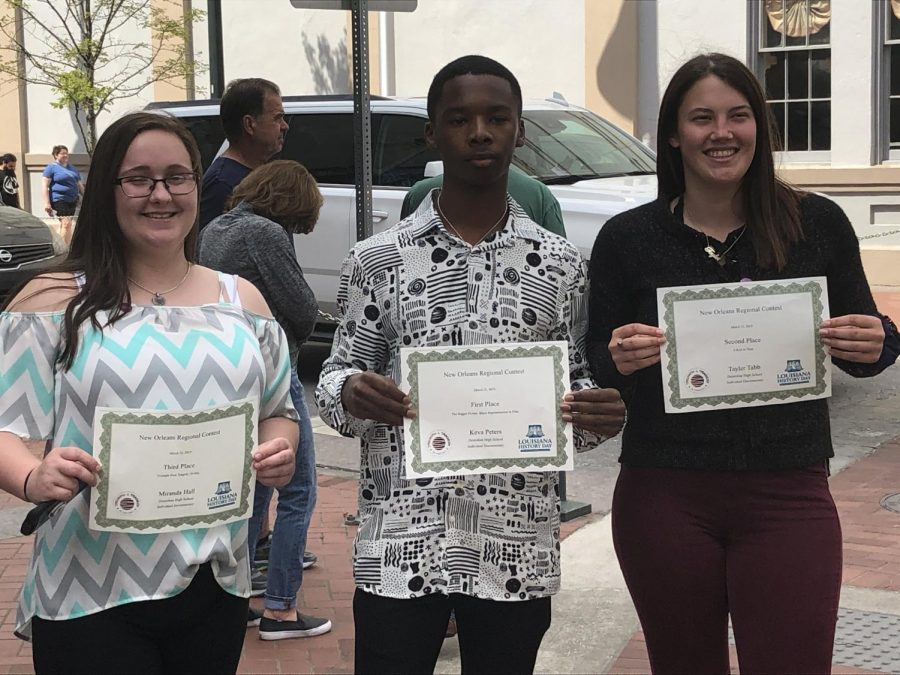 LULING, LA – Two Press Play Team Members are advancing to the national round of the National History Day competition after placing 1st and 2nd at both the regional and state level, while a third will spend twelve days in Normandy this summer after winning a scholarship.

The awards were handed out at the Louisiana History Day competition on Saturday at the National World War II Museum in New Orleans. The contest features regional winners from around the state in the categories of exhibit, performance, website, paper and documentary, with sub-categories of individual and group, as well as junior and senior divisions. The top two in each category advance to the national competition in June 9 – 13 in Washington, D.C.

Keva Peters, a senior at Destrehan High School, earned a first place finish at both the regional and state level for his documentary called “The Bigger Picture: Black Representation in Film”. Peters interviewed film historians and film makers about how the portrayal of African Americans in film has progressed between 1915’s The Birth of a Nation to 2018’s Black Panther.

Tayler Tabb, also a senior at Destrehan High School, finished second at both the regional and state level for her documentary “A Riot in Time: The Gary Tyler Story”. Tabb interviewed historians, a journalist, a former Destrehan High School principal and the childhood best friend of a 13-year-old who was killed during a riot at Destrehan High School in 1974 as the school was in the process of desegregating. A 16-year-old DHS student was charged in the shooting and spent 41 years in jail before he was released in 2016.

Miranda Hall, a junior at Destrehan High School, finished third in the same category with her documentary “Rise Over D-Day: Triumph & Tragedy”. While Hall didn’t place well enough to advance to the national level, she was awarded the Normandy Academy Scholarship. This summer, Hall will take part in a 12-day experience with other students that will begin at the World War II Museum in New Orleans before traveling to Normandy, France to tour the site of D-Day. She is one of only two students in the state of Louisiana to receive the scholarship to make the trip.